Because it's really fucking good.

[This post was originally published on February 15, 2012 on my old blog at keithcalder.com.]

For Valentine's Day 2012, Jess and I decided to see Dirty Dancing at a theater here in London. this is probably the 4th or 5th time I've seen the film, but the first screening for over a decade. It's also the first time I've ever seen the film projected in a theater.

I've always been a fan of Dirty Dancing. Unfortunately, as a cultural phenomenon, “Dirty Dancing” has moved beyond the quality of the film, and now exists as a polarizing pop-culture item that people “love” or “hate.” This is a shame, as the film itself is of remarkably high quality.

So what the hell, I'm going to make the case for why I believe Dirty Dancing is one of the great films of the 1980s.

Dirty Dancing is incredibly dense with interesting thematic content. It contains interesting explorations of class relations, shifting family and cultural dynamics in the mid-20th century, the maturation of father/daughter relationships as a daughter becomes an adult, but mostly it's a film about believing you can change your world and the importance of helping other people. These last themes are touched on by all of the interweaving storylines and major characters, and is the beating heart of the relationship between Baby and Johnny.

Baby and Johnny have a love story built on the belief they have in each other, and their ability to expand each other's horizons. Johnny teaches Baby how to dance and how to express herself. He helps her take the path from timid teenager to strong expressive adult. Baby in turn gives Johnny the strength to push against the class driven glass-ceiling he feels restrained by. In the most basic and compelling sense, they complete each other. They are simply better people in each other's company. We fall in love with Baby and Johnny for the same reason why they fall in love with each other, and this is the ultimate success for a dramatic romance.

BABY'S RELATIONSHIPS WITH HER FATHER

The second biggest driving relationship in the film is between Baby and her father. People generally attribute the Baby/Johnny dynamic as the cause for the film's rabid female fanbase, but I think the father/daughter relationship has an equally strong appeal and elevates the film beyond just another teen romance. The film uses the events of the narrative and Baby's character arc to reflect the universal relationship dynamic of a father realizing his daughter is not just a child to love but a person to respect. Baby leaves Dirty Dancing as a truly realized adult in all her important relationships.

The screenplay for Dirty Dancing is exceptional. If you've been following my blog, you can tell that I have pretty strong beliefs when it comes to the power of a well executed dramatic narrative. Dirty Dancing never lets its narrative tension slack, and every scene is a real dramatic scene, which has become a rarity these days.

When I describe a scene as a “real dramatic scene,” I mean something very specific. In his book “On Film-Making,” Alexander Mackendrick defines a dramatic scene as…

…one in which something happens: an incident or an event takes place, the situation between the characters is different at the end of the scene from what it was at the beginning. The equilibrium has been altered and there is some narrative momentum that drives the characters (and us the audience) to a new situation in the next scene.

This idea of indicating narrative progression is hugely important when it comes to structure. It's well explained in Matt Stone and Trey Parker's NYU lecture on story structure that went viral in 2011.

We found out this really simple rule… We can take these beats… of your outline and if the words 'and then' belong between those beats, you’re fucked. You’ve got something pretty boring. What should happen between every beat you’ve written down is the word 'therefore' or 'but.'

Dirty Dancing is almost entirely structured using strong dramatic scenes. Every scene propels the plot and the characters, and this is what allows for such dense thematic, narrative, and character content in a brisk 100 minute running time.

This alone would make Dirty Dancing an impressive screenplay. What makes the writing exceptional is that you never notice this expert craftmanship! Hell, I'm always looking for this stuff, and it took me a few viewings to realize how well crafted the script is. You never feel the invisible hand of the author forcing the story along. The scenes exist as natural moments between characters, where you believe they are making decisions and experiencing the world exactly in that moment. As a result, the audience also lives within the moment of every scene.

It's certainly not enough to have a brilliantly structured and told story. Having a strong dramatic structure definitely helps make a film compelling to watch and avoids the cardinal sin of boredom, but it's not like most people look back on a film they loved and say “it was amazing how every scene had narrative propulsion.”

The things you consciously remember and love about a film are the details. The iconic shots, the memorable marriage of dialog and performance, the shocking peripeteia (reversal of circumstances; turning points), the powerful scene or sequence, or the twist ending. The moments and the details.

The red pill or the blue pill? Indiana Jones shooting the swordsman. Bruce Willis was dead the whole time. Darth Vader reveals he's Luke Skywalker's father. Gene Kelly singing and dancing on a rainy street. “Forget it, Jake. It's Chinatown.” Slim Pickens riding the bomb. “I Fart In Your General Direction.” Johnny lifting Baby above the water of a Catskills lake. “Nobody puts Baby in the corner.”

Dirty Dancing draws us in with its expertly conceived narrative, and hooks us eternally with its exquisite details. 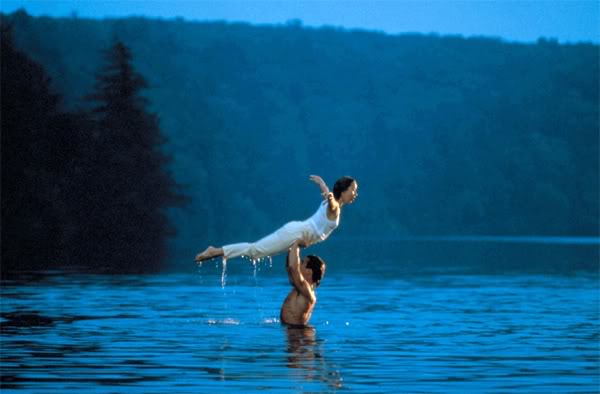